News / General News / How to convert a Dutch barn

How to convert a Dutch barn

Planning consent for a Dutch barn conversion, on a farm in Herefordshire, into a residential development was given on condition that it was for tourism benefit.

Richards Castle is a remote village near the north-western edge of Herefordshire, near Ludlow. A Dutch barn conversion is not alien in the landscape here, which is characterised by rolling hills and occasionally by mature woodland. Livestock farming is evident but in a much-diminished form. Smallholdings are few and far between, having been replaced by agri-business supporting the wider UK economy, a contemporary desire for complex consumption and land-hungry habits.

As elsewhere in rural Britain some of the agricultural Dutch barn buildings which supported traditional farming have become derelict. Dutch barns are inefficient for modern production and have outlived their use. Their redundancy is not easily addressed and planning departments are not always receptive to change. This resistance to permit domestication of Dutch barns is at odds with Local Authorities evident willingness to convert traditional stone and brick barns for use as second homes, or holiday lets.

Castle Court Barns were subjected to planning resistance when the owner began their own attempts to convert the Dutch barns to domestic use – the self promoted Pre-Application came back negative and the owner almost demolished the whole lot. Thankfully they spoke to Thomas Studio just in time.

In 2017 the client invited Architect Garry Thomas to consider how to convert the Dutch barns and present a new application. Following initial positive feedback for a proposal that would see the Dutch barns converted into sustainable residential units, planning permission was granted under delegated powers with the caveat the development would be for tourism use.

Tourism would mean generating trip movements to the area, but in time the applicant’s children have the possibility of getting on the housing ladder in the future should the Dutch barns convert to full residential use to meet local housing need.

The strategy of reusing as much of the existing building fabric as possible meant the existing timber frame and timber cladding would be re-used minimising new materials brought to the site. Extensive demolition of a rather ugly modern portal framed cow shed adjacent to the Dutch barns would ensure the farmyard was restored to more historic proportions.

Adjustments to, and repair of, the timber structure of the Dutch barns was required as many of the columns holding up the separate buildings were worn, or removed, when the steel portal framed buildings were constructed adjacent.

The Dutch barns were sub-divided into three separate units, with each given a colour distinction. Colours were used to market the barns: red, yellow and blue being the primary and visible impression giving individual character to each Dutch barn.

New landscaping was required around the Dutch barns, to remove concrete hard standing and to improve the setting and approach to the individual living spaces. Each barn having its own semi-private space and characteristics with shared spaces for recycling and parking.

The Dutch barns were planned around the existing timber structure. The key issue in addressing the adaptive re-use of buildings is how far the structure and spaces can be kept in the “open” nature. It is a mistake to wall off barns as they perform much better as flexible and open plan living spaces.

Garry’s strategy for re-use veers towards creating a flexible open-plan living space that is adaptable to all family needs. Existing openings are respected and some previously boarded-up windows and doors reinstated, causing minimal disturbance to the existing patina of the Dutch barns. High-performance windows and doors of anodised aluminium are specified for the openings keeping frame dimensions as minimal as possible – the last thing you want is to domesticate old Dutch barns – as this only serves to spoke the planners.

Propped open hatch doors mounted on the outside of the building recall some of the Dutch barn’s earlier detail. The hinges and stays from which the doors would be operated are mounted and exposed. The structure in timber allows the building to be insulated internally to minimize cold bridges. The combination of a respect for the existing fabric and subtle detailing is a rich strategy. The language of the farm is still palpable.

The Dutch barns are entered through recessed doorways to provide an internal porch so that the external appearance is not compromised. Frameless double-glazed units joined with mastic are fixed back to a steel frame, in the form of a cube. It serves as a recessed glass lantern and allows daylight to flood into the area beyond. It is elegantly detailed and signifies that the Dutch barns are a quality-space and an enjoyable holiday venue for guests.

Beyond the Dutch barns are views to the surrounding countryside, a reminder of the enjoyable walks that await. To old castle of Richards Castle a short walk away, and the gastronomy of Ludlow a short trip by car.

Beyond the glass porch is a generous kitchen, dining and living space with the opportunity to dine outdoors on fine weather days. Upstairs are generously proportioned bedroom-spaces arranged to ensure double-height spaces are possible, flooding the ground floor with daylight from above. Each unit has a wood burner for instant country atmosphere.

The staircase is in wood and conceals ground floor WC’s and cloakroom spaces to allow wet-dogs, muddy-boots and rain-gear to be safely stowed – this is rustic Herefordshire after all.

Warm materials and colouration offer modesty and simplicity of the design, avoiding an austere theme that might have prevailed. Large format windows are placed on the side where country viewing and the morning sun is possible, giving more privileged light and view. 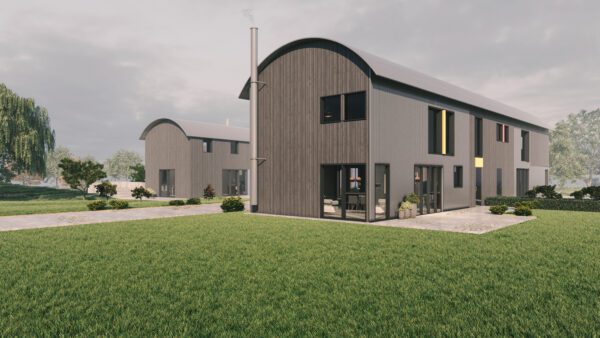 This is a thoughtful and well-realised scheme, both in its architectural attitude and its reuse and adaptation of three Dutch barns.

Architect Garry Thomas has demonstrated an ability to work with confidence in rural Herefordshire, away from the glare of the London scene. Here in Herefordshire countryside, the result is planning permission for a Dutch barn project that is mature, assured and elegant.

The heritage value that old Dutch barns have should never be dismissed as they result in fantastic residential conversions.

How to convert a barn under permitted development